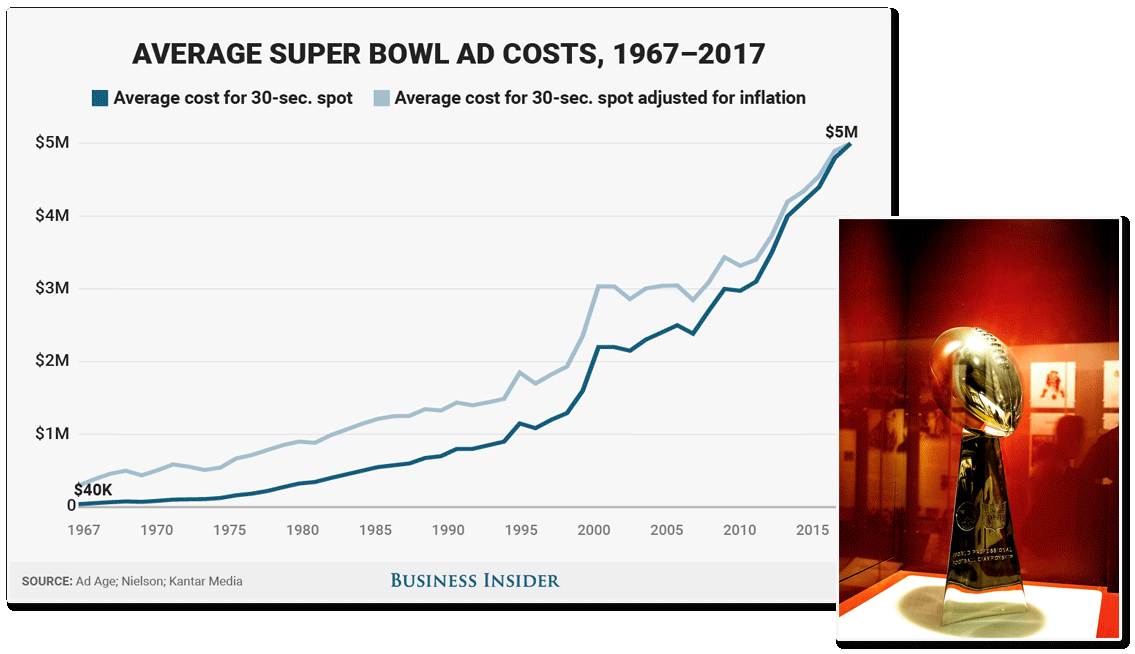 Even though you may not have a Superbowl sized marketing budget, it’s time to strategize for 2018!

A marketing budget typically covers costs for advertising, promotion and public relations. The size of the business can usually help determine how much of its annual sales it spends on marketing. It also depends on the amount of money the competition is spending advertising. Depending on the industry, marketing budgets can range from as low as 1% of sales to over 30%. New companies may spend as much as 50% of sales for introductory marketing programs in the first year. Smaller business may just try to match the spending of their direct competitors.

Let’s look at the costs of popular advertising strategies that many companies use.

With the Super Bowl coming up in February, we decided to look at the cost of some television commercials. According to Business Insider, in 2018, a 30-second Super Bowl ad will cost about $5 million. That’s a whopping $166,667 per second! There were about 111 million people watching the game in 2016, so we can assume that these ad prices will not be dropping any time soon. Prices have gone up just about every year, starting at $40,000 in 1967. And according to Ad Age, $4.9 billion has been spent on advertising in the past 51 years of the Super Bowl.

The cost of an on hold system depends on what equipment you have. Many of our clients have VOIP (internet phone) systems, but many have players that are plugged into their phone box. These players can take flash drives and the older models take CDs!

Online we found that message on hold systems are typically billed as a yearly contract. Here at AyerPlay, all of our clients simply pay once for their program, and use it until they decide to update again!

If you’re going to spend a few hundred dollars advertising, it’s nice to be able to target messages to people who are already interested in your business. They’ve already called you, now let them know about your great products or services! It’s a great alternative, especially when you compare it to the multi-million dollar Superbowl prices!!!

We are excited about all of the new services we have to offer at AyerPlay! They were featured in a local article along with some history of our company and a Q & A with our president, Becky Dixon.

Don’t Put On Hold “On Hold” for the New Year!

When it comes to marketing your business, change is the name of the game. In 2017, marketing strategies changed almost on a daily basis, and 2018 promises to provide more of the same. To make sure your Happy New Year lasts all year long, now is the time to take a fresh look at your own marketing. While this rapidly changing world gives us much to consider, it's important to not overlook some obvious opportunities. Take on hold messages for instance. The people who hear your message are ones who called you, so they're already interested in what you have to offer.

On Hold and Endless Online Opportunities

Ready to get started?

Ready to Get Started?